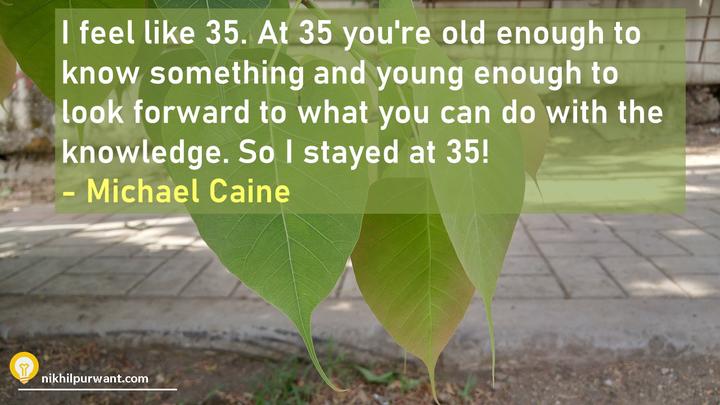 When I was in college, I wanted everyone to be happy no matter whether they themselves were trying very hard to stay miserable. That was me - in my late teens and early twenties.

And everything was a zero sum game. For people to be rich they must have gotten there by oppressing the poor. For someone to be right, someone else had to be wrong.

Then I got a job. Became a taxpayer. And started looking at the world from the perspective of people who work for a living (or help others work e.g. house-spouses) and those who don’t. And I wanted people to be happy, if they actually deserved to be happy and were at least trying a bit for it.

I was still heavily dependent on media to shape my opinion and was pretty much a company man in terms of work. A large chunk of my time would be spent working and thinking about work. Relationships took a back seat and peer pressure would drive many of my decisions.

But then I turned 35. And right around that time I realized I had started getting tired of working all the time. Did not enjoy it as much. Also I realized - we are but a very small part of a very massive story. I had thought about the size of universe vs size of us before.

But what reignited this thought process was - when scientists pictured a black hole which is 53 million light years away and has a mass of 6.5 billion times our sun. So travelling at the speed of light it’d take around 53 million (5.3 Crore) years to get there. I realized that the scale of the universe is so huge that I cannot even comprehend it. For example earth is more than 4 billion years old. Even if a man lives for 100 years that is just 0.0000025% of earth’s age. You know what is 0.0000025% of 100 years is ? it is 0.78 seconds.

So whatever 0.78 seconds feel to you, is what your life is to earth’s total existence. Its nothing from the earth’s perspective.

The only thing that is in our control - is to live whatever years we got - peacefully. Working to live and not other way round and spreading joy in the process, if possible.

With this enlightenment, fighting for a promotion or getting worried over it seemed like such a nonsense. Pleasing people, getting their approval and peer pressure felt secondary. And at the age of 35 - I knew enough to take a second look at my priorities. And I did.

I was a different person. A lot more laid back. Still believed in working but knew even if I made mistakes; in the grand scheme, it did not matter. All that mattered was being around warm people. I just had to do my best whenever I could. It was a liberating experience.

Throughout my life I had different outlook towards world at different points in my life. When I was in my teens and early twenties it was quite naive, Then it was very practical - dominated by my workaholism. At 35 though, my outlook seems more holistic. I know enough of the world, and my place in it. And I strive for the humility, energy and enthusiasm to do something with that knowledge

I have already written about another quote by Michael Caine.

Michael is an Oscar winning English actor, many of you must have seen him in several Hollywood movies. His portrayal of loyal, calm and composed Alfred from the Dark Knight Trilogy is one of my favorite performances by an actor.

And now for the picture behind the quote. It’s a Peepal tree with its young fresh leaves. Siddhartha Gautama meditated under a Peepal tree and became “the” Gautama Buddha. Buddhists call the tree - Bodhi - the tree of enlightenment.

And once we realize how small we are compared to the big story of the universe - the real enlightenment begins. Earlier the better. Sometimes your age brings with it some wisdom. It happened at 35 for me. And I want to hold on to that enlightenment.

Thanks for reading through. Share this with someone who needs it.