26. What are you asking for - an advice or a corroboration ? 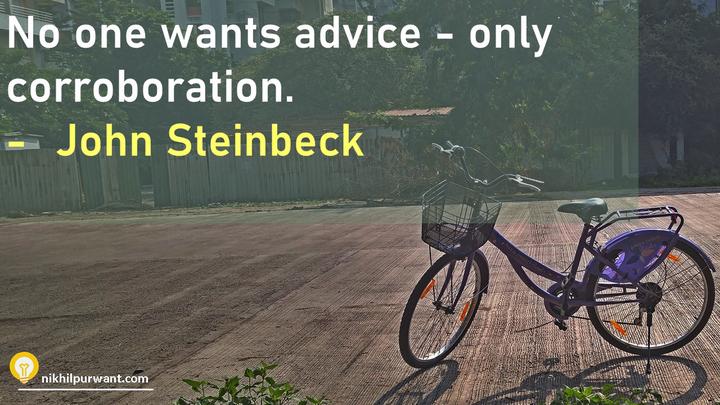 These are hardly the outcomes for an advice. It’s not that you are delivering a news to them which is happy or sad. And more often than not, irrespective of your advice - they do what they wanted to do anyways.

Best way to recognize your faults is to see them manifest in someone else.

So when I noticed most of the people who came to me for an advice already had decided what they wanted to do. All they wanted was a confirmation / affirmation - I realized even I was doing the same thing whenever I would seek advice.

this process would waste countless hours spent on discussions leading nowhere and I realized that I had made several wrong decisions because of my biases and not listening to my friends.

In fact I’d gotten a reputation for not being sincere and most people I’d seek advice from would end up saying “Don’t ask me - you do what you want to do anyways!". Something had to be done.

So I decided to first apologize to my friends for not being sincere and then I changed the strategy.

Instead of asking “What should I do A or B ?" I told them

And I would be very sincere in accepting and acting on the advice based on the outcome of 2. If my friends were able to prove to me that B is not the right way - I’d choose A.

And if they could not prove that B was wrong or agreed with my reasons for choosing B - I’d do B.

This saved me many relationships and friendships and my decisions have been much better.

Today’s quote is attributed to John Steinbeck who was a Noble prize winning American author. Lot of his work has been adopted for critically acclaimed Hollywood movies. Interestingly he has another quote about advice which goes like this

You know how advice is. You only want it if it agrees with what you wanted to do anyway.

And now for the picture behind the quote - this is my trusty bicycle pictured on the way back to home. One of the advices I am glad I have taken relatively seriously is to watch the weight and my cycle has come in handy for that …

So next time when you seek an advice give it a thought, are you really just seeking a corroboration ?

Thank you for reading through.