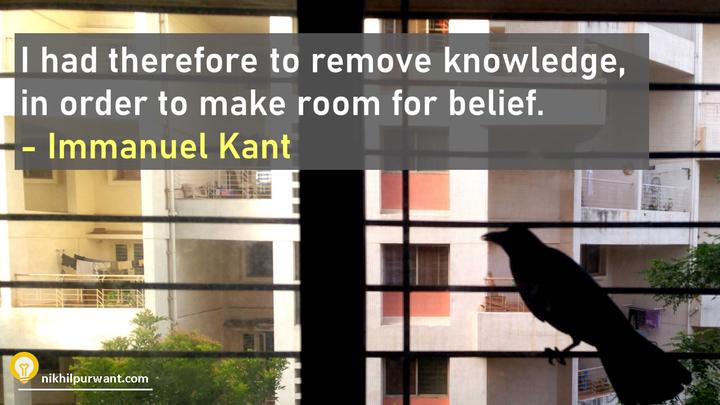 Almost all the knowledge is at our fingertips these days and we cannot be fooled easily. Anything suspicious, we can just google it. And we do - so many times. More over if you are well educated, you are not prone to accept beliefs at their face value. You want to do some digging before making your mind one way or the other.

Having so many avenues of knowledge and fact checking sometimes brings in arrogance - it did for me.

And as an Indian, since childhood I have observed everyone around me carrying some beliefs like, don’t sneeze in the door and no nail cutting after evening, eat curd while going out and many more.

I would probably not make fun of these but more often than not oppose implementing them. Because they did not make any sense to my educated mind.

With so much knowledge, there was little tolerance for beliefs without proofs.

But as you get older they say you get mellower and less obnoxious. I started looking at beliefs in a different light.

Try this - when you have bad breath take a spoonful of curd / yogurt. Don’t just eat it right away - using your tongue run it around your mouth, keep it for quick 10 seconds before swallowing it. It relieves your bad breath.

Or of course you can use Listerine or any of your favorite mouth wash or gum. But that’s the thing, these were not available in ancient world did they?

So if you are going out for something important wouldn’t it make sense to have a good breath - it would. And hey, I am not saying the ancient Indians justified this belief the way I am doing it. But in this case my experience of it actually working to relieve bad breath, far outweighs my exuberance to squash or ridicule the belief outright.

Of course there must be hundreds of beliefs that are just superstitions and for those I can squash them with my knowledge. But for others that are linked with common sense, I have to keep my knowledge aside and make some space for experiencing the belief and then decide.

We could be wise but wisdom comes from experience.

Immanuel Kant, or simply “Kant” is considered one of the greatest philosophers of all time. He argued that while all the ancient religions had issues, they did encourage people behave ethically and that was important.

In his book Religion within the Boundaries of Mere Reason he argues that religious experience can be best understood through rationalism. He says

It is beyond a doubt that all our knowledge begins with experience.

Which in today’s information age not strictly true. Our knowledge is borrowed for the most part and I feel a lot of that, then, leads to at least minor arrogance of not having space for beliefs which might be rooted in ancient experiences.

And now for the picture behind the quote.
Well, another Indian belief is when the cuckoo bird sings or you hear their calls the rains are not far away.

It is again a belief rooted in thousands of years of experience and indeed these birds arrive and start making their presence felt in India’s monsoon season. And hence the belief.

The bird on the window is the Indian Cuckoo not the pied cuckoo which has been researched on for its rain connection - but nevertheless it’s another belief that has a sound reasoning behind it and I am willing to be open minded about it.

Sometimes it’s better not to fight belief with knowledge - but trace the origins of the belief, who knows, you might end up living an ancient experience.

Next time try to give the belief a chance. May be it will add to your knowledge.