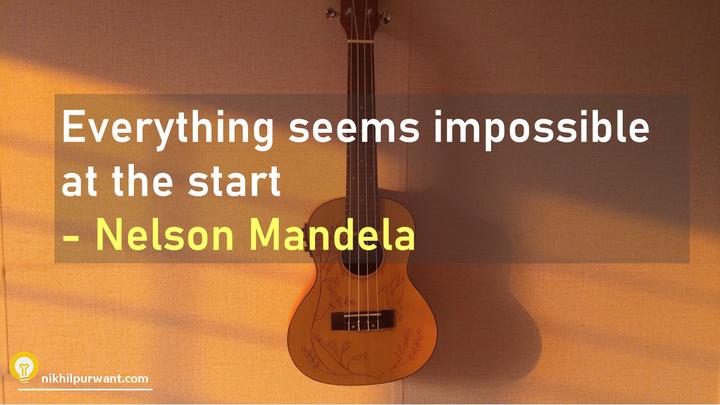 In the first three days when I started learning a car I was convinced I could never do it. And since I was learning a manual transmission car, I would be extremely anxious before my driving class and in fact dropped out less than one week into it.

That was years ago and since then, fortunately, I grew out of it and now enjoy driving. While learning how to drive a car is not a major achievement, I am sure many of you have had at least one such experience - give a few seconds to play it in your mind right now.

Depending upon where we are in our lives, sometimes even the simplest of the things like getting through the day sometimes seem impossible.

And when we start growing a bit older any new thing that we take up presents so many challenges that it makes us anxious, worried, disheartened and more often than not we give up.

Sometimes things don’t work on the first go or first few tries. Most of the times there is no one to cheer us up and solve the problems and show us the path to the finish line.

Think of some of the things you ended up accomplishing because you had to, for example learning a new language, starting a conversation with someone you secretly admired/loved, getting back to life after an accident, being strong for someone whom you cared about, helping a friend in crisis, getting over a breakup ….

More often than not it depends on how badly you want something to be done. All of those things seemed impossible at the start, then became difficult but possible and then you ended up accomplishing them just because you had to.

This quote is attributed to Nelson Mandela, Of course he does not need any introduction. Mandela was instrumental in ending the apartheid in South Africa. He served 27 years in prison for his cause - and if he had given up after let’s say 20 years - still a long time, he wouldn’t have achieved what he did for his countrymen. This quote is not merely a statement but captures entire life of Mr. Mandela.

And now as always for the picture behind the quote. It’s an Ukulele I have been trying to learn to play for some time now. It seemed impossible for quite some time but now I am getting a hang of it. I think I am at “hmm it’s possible” phase now, still early but going somewhere !

I am sure you too must have had such experiences - do share them in comments.

And next time you encounter something impossible, remember all the things you achieved that felt impossible at the start and go ahead. Take the first step.

Thanks for reading through!