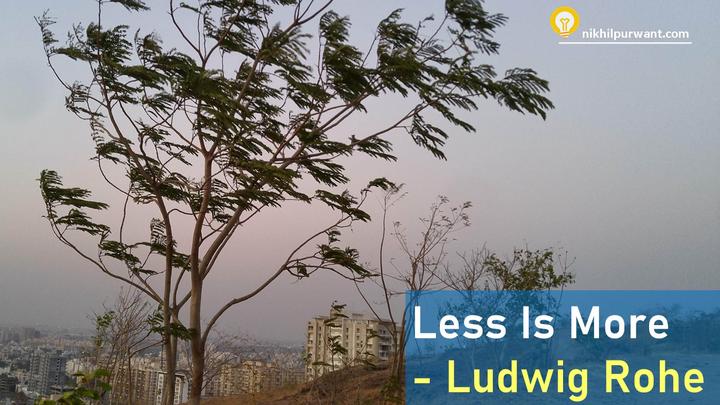 When Google was launched back in 90s, there was another search engine you might have heard of, called altavista.com, and that was the top search engine. This is Google’s home page compared to altavista’s

Another search engine msn.com was competing with google in 2000s and this is its homepage compared to google’s

While Google’s homepage right from the early start focuses you to its core functionality viz. the search. With minimalist but in your face search input and search button, for the others, search seems like an afterthought. A new uesr is left with finding where to enter the search term!

In addition to Google’s kick ass search capabilities, the clean search interface is also credited for its phenomenal success which, of course eventually crushed the competition.

Google’s homepage today has not changed a lot. In fact it’s even more compact. And even a new user knows what to do after landing on this page.

By providing less content or in fact only the required content, Google was able to help users focus on the task at hand - that is search.

What is true with this story is true with your desk - if you have too many things on your desk (a.k.a. messy or a cluttered desk) your productivity takes a hit. More often than not you keep searching for what you need - let’s say a pen, the mouse, other end of a power cord or a data cable.

Did you know every second Monday in January is celebrated as National Clean Off Your Desk Day in the US. It’s a fun holiday sort of and this is what I found online about it

It is quite strange - but whenever you add more things, instead of improvement you actually experience chaos.

Intuitively it would make sense that adding something should also add the value but many a times that is not the case. Loss of focus, distraction are the results of many such additions.

I am sure many of you would have experienced this - at least the messy desk part which is such an unwelcome sign when you reach your desk in the morning. In my case a messy desk guarantees a very long coffee break just to get away.

But not just with desks, some people have too much furniture around their house and at every step everyone has to watch if they are not going to brush against some expensive decorative piece. It’s a very stressful house tour.

More importantly though, when you have too many things going on in your life you cannot really focus on anything correctly. The phenomenon sometimes referred to as having too many balls in the air.

Less is more implies that if you have just what you need instead of tens of superfluous things - you can focus on what matters.

This quote is attributed to Ludwig Mies van der Rohe who was a German-American architect. He adopted the motto Less is more to describe his aesthetic.

The idea was using only the necessary components of a building to create an impression of extreme simplicity. Another one of his quotes further cements his simplistic, necessity oriented aesthetics.

Architecture begins when you place two bricks carefully together.

In fact possessing only required / essential things and living for experience rather than worldly possessions is a trend that is catching a lot of wind lately it’s also referred to as minimalism. Search for it, people have done some wonderful things by being minimalist.

And now for the picture.
What do you observe in it? I can go on describing this windy evening but a picture is worth those thousands words. And you can draw your conclusions with me saying pretty much nothing about it.

Thanks for reading through and Let me leave you with a question - What are you holding onto that is preventing you from focusing on what really matters ?