27. Three reasons never to copy someone and what to do instead. 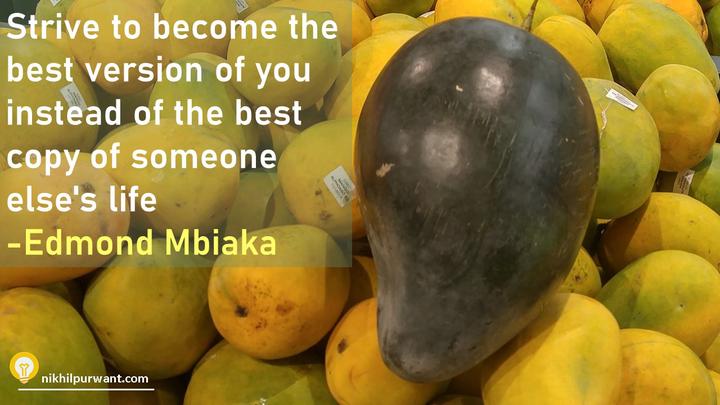 Many of us have an idol in life that we look up to. A Scientist, a teacher, a sportsman or even one of your parents could be the icon you want to be like when you grow up. And as we keep switching what we want to become our idols change as well.

This process does not stop when we finally grow up or even grow older, really ripe in our late thirties even (for me). We may have dialed back on the aspirations by then. May be you cannot become the sportsman that you initially set out to become. Nor a scientist because may be it turned out that, well you don’t really love science all that much.

When we are in our late thirties the idols are people one or a couple of levels above us in office or in the society in general. Because that is a logical next step and no radical action needs to be taken. We just have to do what they are doing now to progress.

1. Copies usually never succeed as much as the original

That’s because whoever you are looking up to and copying, there are tens of other who are trying to do the same. So there is a competition to become “that” person. So even if you closely mimic everything your idol does, others would be able to do that too. The success then will be shared among all of you in the best case. Just give it a thought, has any actor’s double been as successful as the original actor ? In fact many of them have to work as stunt doubles which is quite a dangerous thing to do.

2. Survivor bias is the real killer

For one successful person there are hundreds if not thousands that tried to do the same thing. We only get to know about those who succeeded which is very small minority of the total number of people who made an attempt (or several attempts). Only looking at winners, is called as survivor bias, it is extremely misleading. When we imitate, we do that based on this bias and it can be quite detrimental.

3. You lose your soul, when you are imitating someone else

When you are imitating someone, essentially you have stopped being yourself. And in the process you lose your true essence. That’s probably why Ralph Waldo Emerson says

But then what can we do ? Just not copy or learn from someone at all ? and is that even possible ?

Well, we stand on the shoulders of people that have come before us. No man can stand on his own without utilizing the knowledge gained by people before him. So getting inspired by people is not only important but it is a necessity. However following questions should be a good start in becoming an original success story

And when you have answered both of these questions for yourself, Go ahead and imitate only the efforts and dedication of that person. In fact try to go past them in terms of efforts.

This way you will be able to keep your originality and aspire to be the best in the area of your interest. You can become as the quote says the best version of yourself.

The quote is attributed to Edmond Mbiaka who is an American Self-Help Writer. He also is attributed with another powerful quote which probably we should ruminate on someday

And now for the picture behind the quote. At a nearby supermarket I found a watermelon which seemed like it was trying very hard to be a copy of mangoes across the aisle. I put them together and clicked this photo. It’s still a watermelon - which by the way is one of the best fruits out there. It need not try to become a mango - I guess you get the point.

Be yourself. In fact, scratch that. Be the best version of yourself.