08. Of The Trees And The Shade 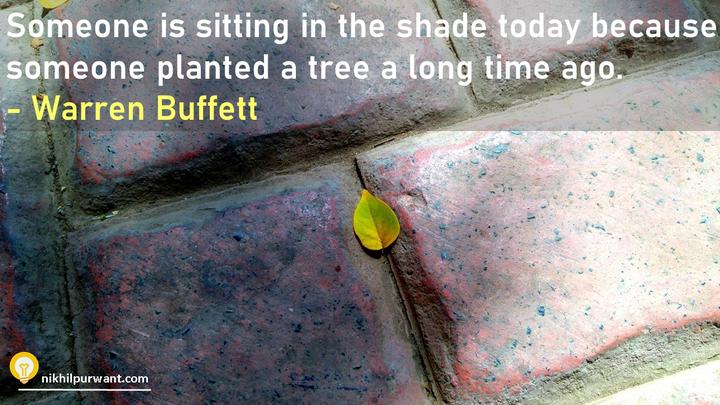 Founder and CEO of Amazon, Jeff Bezos is the richest man in the world. When speaking about the founding days of amazon.com he says

I didn’t have to build a transportation network to deliver the packages, It existed, it was called the post office.

For the first two things he was going to leverage the power of world wide web which was in its infancy in early 90s. And for shipping the books to his would be consumers he would actually drive to the post office himself and ship them.

He mentions unless the stellar ecosystem of internet, credit cards for accepting payments and more importantly post office were available to him, his company which is right now one of the largest in the world could have never taken off.

Lots of little things have to happen for us to be able to do every little thing that we take for granted every day.

I am writing this while in the Covid-19 lockdown. These days I work from the home. So I am employed even being at home. Thankfully India has the internet infrastructure which enables me to do that.

More importantly I am able to eat and feed my family because few months ago some farmer grew food and there is a supply chain - from that farmer to the shop owner and I received that food in a packet.

Realizing your life is made possible by 100s if not 1000s of little things that have been accomplished over 10s of years is just the first part, the second part is doing our bit, to create something that someone else can build upon years or even decades later.

Bezos says with Blue Origin which is his rocket company he wants to do all the heavy lifting in the space exploration so that, someone years from now can use that infrastructure to do great things just like how amazon that was built upon and was made possible because of the world wide web and US postal service.

Today’s quote is attributed to Warren Buffet - another very rich man and for many years the richest one.

He is the legendary investor I am sure many of you have heard of. In 2006 he announced a plan to give 83% of his wealth to charity. Not only does he absolutely believe in his quote but also is doing his bit to create something for millions of others to build upon through his philanthropy.

A true legend. He is also attributed with amazingly insightful quotes like

Risk comes from not knowing what you’re doing.

I am sure we will try to ruminate on some of his other quotes in future.

But for now, as always the picture behind the quote. There is a leaf sitting on the edge of sun and shade. Just like us. While we enjoy the shade from someone else’s tree we should keep creating shade for future generations as well.

Give it a thought - what all had to happen for you to live the life that you are living now.

Keep creating for someone else to build upon years after.