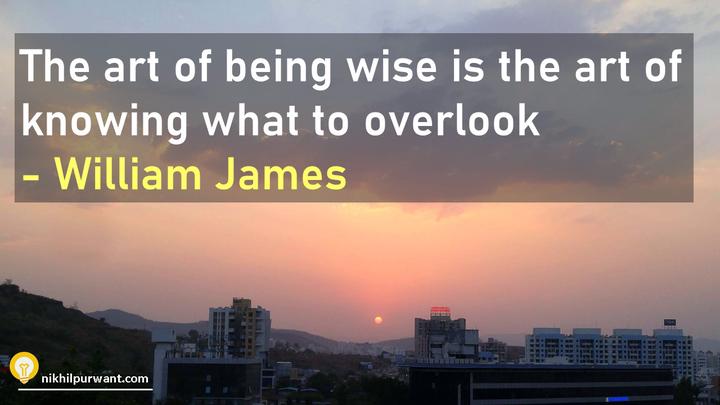 Would you rather go to a rude but very good dentist or a pleasant but a not so good dentist? Anyone who has been to a dentist knows a skilled dentist is better than a nice one :)!

Each one of us have our flaws. Most celebrities, politicians, players that we idealize have imperfections we regularly overlook - in fact we don’t even want to know about them.

But when it comes to our family, our team and many a times even ourselves we end up focusing on the small imperfections and try very hard to “make it perfect”.

I used to do it all the time. Nothing was good enough for me. And more often than not I had the best intentions towards everyone I was trying to “fix”

But in the process of fixing people off their imperfections, I pushed them away. And then it dawned on me that most people I look up to and respect, always overlooked my flaws whenever they were minor and only intervened when the flaws overshadowed my virtues.

For example one of my friends repeatedly pointed out that I was being overweight till I took some actions towards it but chose to overlook many other things.

When we focus only on the flaws of people, teams and things - even with the best of the intentions - we tend to exhaust them, break their moral. Just imagine if you had to fix everything you are bad at without ever getting noticed for all the things that you are good at.

As the cliche goes - no one is perfect. But in fact sometimes those imperfections make the person who he/she is. A blunt doctor will make sure that you watch your weight and take your vitamins just by laying it straight on you or even scaring you at times - Most people need tough love :) So the bluntness is a part of being good doctor for him/her.

I have found that the most angry people are the most compassionate ones - their anger is just another side of their being passionate. And most soft spoken people have the most important thing to say. And overlooking those flaws makes me actually experience the real person.

And it’s not just with people but also places. The restaurant with a modest ambiance may serve the best food and so on.

And I have made many new friends and have been reunited with many old friends, family members just by letting the flaws go!

And today’s quote is attributed to William James who is considered as father of American psychology and co creator of school of pragmatism.

Pragmatism gives utmost importance to “Ideas that work” as opposed to ideas that “sound great” e.g. everything should be perfect is not a pragmatic position.

And as for the picture behind the quote it’s a sunset captured from one of the hills near my house.

I mean it could have been perfect if those buildings were not in the way …. well but if you overlook them - It’s still a sunset with all it’s glory - isn’t it !

Again. The art of being wise is the art of knowing what to overlook

So here’s a question - what do you think you can overlook to make a relationship, friendship, team better?

Thank you for reading through!