02. The Importance Of Being Nice 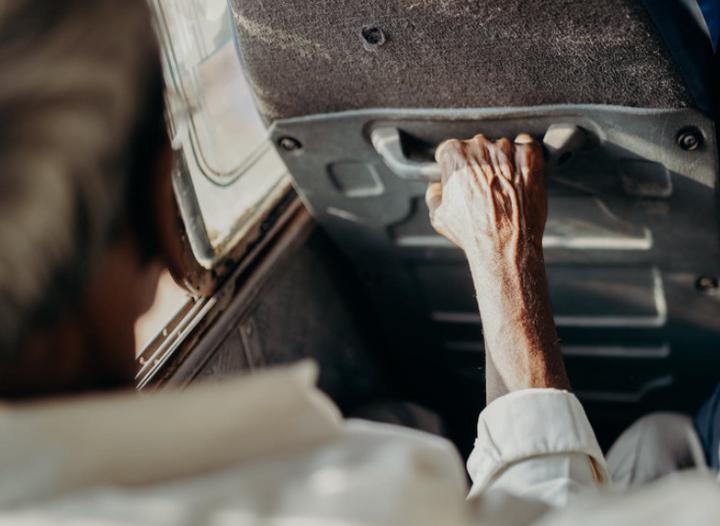 Some years back, I read an article in Times of India.
It was titled ‘hug a stranger today’. It talked about how people on outside might seem calm but from the inside they can be incredibly sad and how the writer finds such a person at an airport who at the start seemed weird but later she got to know his sorrow which was such deep (thanks to her plane which got delayed).

It was only a week or so since I had read that article, I vividly remember we were returning from my grandma’s house, me, my mother and my little brother boarded this crowded bus.

It was a Sunday evening and everybody was returning to towns where they worked in. Weekend spent with family, everyone seemed happy and at the same time had ‘oh it’s that Monday again’ looks on their faces. Aai (my mother) got the tickets from the conductor as we were urging Aai not to go in this bus as it was awfully crowded and we wouldn’t get a place to sit. It was the last bus to Pune from that place and Aai had office next day hence she was reluctant to agree to our proposal of going next day morning (which would also have meant another night listening to grandma’s stories and no school next day so a win-win situation for us).

Alas, gulping that entire crowd the bus had just started moving, my brother had managed to get himself a place beside a lady and her daughter. Suddenly there was loud banging on the side of the bus someone was trying to stop the bus. The driver applied brakes and the bus came to a halt with people stumbling over each other due to this sudden jerk.

The door opened, everyone was curious to see (and curse) who was the cause, a middle aged person got in, looked like he had been running a lot of distance before he got in to the bus. The man gave the conductor the money and started looking around everyone was looking with an anger which only meant ‘it’s already too crowded. What the hell are you doing here?’

‘I told you this was the last bus now you see why I asked you to leave 1 hour early. We got place to sit now don’t we? ’ The lady proudly said to her daughter, the smile of victory swept across her face.

The man now started looking down…..towards his own feet his face reflected the guilt he was feeling due to other passengers’ stares and some mumbled remarks. I realized his feet were covered with dirt and one of his chappals was missing. It was getting dark, another six hours before we reach Pune I thought, my brother had already slept leaning on that lady’s shoulder.

The bus would stop at its regular stops and some people would alight and some new passengers would come in, although the number of people getting down was more than that of getting in, the bus still was crowded enough and me and Aai were still standing. The man had not left his place since and every time when a vehicle would pass our bus I could see his concerned face.

The lady had woken up her daughter, it seemed like their stop was approaching. It made me really happy to know that we finally would get a place to sit then I can sleep and more importantly I need not see that man’s face.

As the bus halted on its next stop the lady and her daughter got down. Aai took that lady’s place and took my brother on her lap and as I was about to sit beside her, she said ‘Nikhil let that old man sit here, you will get a place to sit on next stop may be, but for now ask him to sit here’. I waved at that man and told him to sit, He was reluctant, may be he was still under that guilt I thought, but my mother insisted and he finally gave in.

He sat down, bus had started moving again. I was waiting for next stop as I was very sleepy and was only one to stand in the whole bus so it was guaranteed that I will get a place to sit now on the next stop. Three hours more ….. I mumbled.

‘I think she’s still alive…..’ the old man said but his words meant more of what he was hoping than what might have actually happened. ‘I think she’s alive …..beta do you think she has made it ?’ old man was asking my mother. ‘Yes baba, I think ….no I know she has made it she is very fine don’t worry and tell me what has happened’.

I was surprised by Aai’s reaction, it was like she knew the whole story. It took some time for the old man to gather himself as tears rolled down his face… I noticed as another vehicle passed by. ‘They burnt her ….beta they burnt her ….for dowry’ …..he was officially crying by now ‘The police here, informed me sometime back, they are going there in the morning but I could not wait beta ….I could not, so came running from the police station to get this bus my wife does not know beta that I have left for my daughter’s place had no time to tell her too. She must be worried too.’

My mother was listening to him like she was one of his family members. The old man continued ‘Last time I saw her on diwali one month back she seemed bit quiet I asked her but she did not tell. She must have thought from where my poor parents would bring this much money but now …….’

Aai comforted him ‘don’t worry nothing has happened to her she will be all right’. The old man seemed a bit ‘together’ by now as he was getting to tell his sorrow to someone and Aai was being a good listener and also was convincing him to believe that everything was ok. Some time went in silence ….

’Beta …are you listening?’ ‘yes baba tell me what is her name ?’ ‘Sunita …named her after my mother ….poor little girl …..wont say anything to anybody wont hurt a fly …why should this happen to her ? why ?’ ‘I have no one to tell and when there is no one to listen then mind thinks things which are very frightening. I am really worried for my daughter’

Bus took its next halt, one person got down, no one got in and I got the place, it was away from where my mother was sitting but I was tired and I went and sat down there. By now I was in no mood to sleep. For one I was feeling bad for that man and for the other I was astonished to see my mother handling the situation the way she was.

From where I was sitting I could see the man talking to my mother. Did not want to but somehow I gave in and slept off. I was sitting beside the door and every time the bus would stop and door would open the gush of cold air would disturb my sleep on one such stop I realized that a seat near my mother’s was empty so I went and sat there.

I was surprised to see that the man had slept off; his face still had those ‘dried tear marks’. As I was about to ask my mother something, she made me keep quiet. I sat down on the empty sit.

On the next stop the conductor came to my mother’s sit and told that old man to get up since his stop had come, the man woke up looked around. My mother was awake (she was awake the whole journey). Aai gave him water bottle he drank some water and then suddenly took my mother’s both hands in his hands and said ‘beta thank you you don’t know what you have done for me bas ab I hope she is ok’ ‘don’t worry baba she is ok and from now on don’t consider you have only one daughter now you have two come to meet me with her I have already told where my office is it’s walkable from Pune station, do come and she is fine don’t worry’.

The old man left the bus and I went and sat beside Aai.

‘Try to get some sleep you have got school later today’ she said looking outside the window.

Don’t know what happened to old man and his daughter. But that day I learnt the importance of being nice…. for people are angry, weird, and sad for a reason and it is better to give them benefit of doubt before blasting back at their behavior.

Thank you for reading through.