07. The Middle Is Always Evil 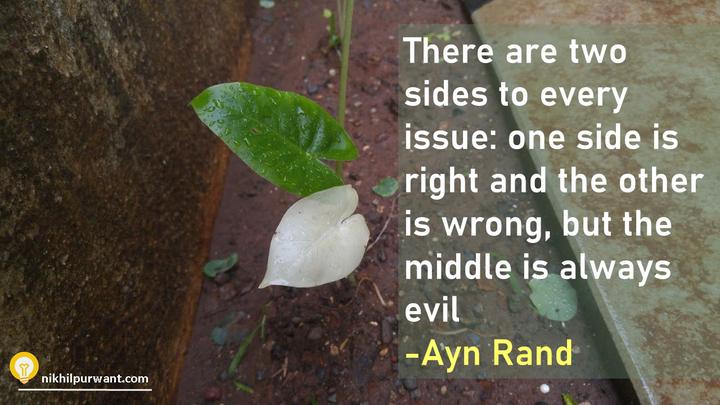 Compromise is the name of the game. We do it usually when we want a little bit of both or want both sides of the argument to come to a middle ground.

But is that always the case? What about some absolutely important decisions? Should you always go for the middle ?

I never gave it a thought and would always be ok with a mutual agreement if none of the options were agreed upon - Until I read this quote. In fact it puzzled me. How can the middle be evil and when ?

So a little digging around got me to the complete quote

And frankly not just for these extreme examples of good vs evil but let’s say our daily eating habits - choice between junk food and healthy food should not be little bit of both because while that is a middle ground, the junk food is still going to do damage albeit in the long term.

But between right and wrong choice why is middle ground evil which is to say beyond wrong?

Let’s say between telling lie and speaking truth you choose to lie when needed and tell the truth other times. That’s your middle way between these two clear moral choices.

If you always lied people would eventually pick on that up and stop trusting you and if you always tell the truth people will figure that out as well and always trust you.

So you are giving them a chance. But if you are inconsistent in that (sometimes lying), based on your convenience you are taking away their ability to judge. So from their perspective the middle is absolutely evil.

And then imagine you are not, you the individual. But something big like a company or worse yet a government. When moral policies are inconsistent and selective it always comes at the loss of trust of the general population.

The quote is attributed to Ayn Rand a Russian-American writer and philosopher. Whoever reads some serious English literature is at least aware of her books The Fountainhead and Atlas Shrugged. She developed and laid out (through these books and other essays) the philosophy of rational individualism called Objectivism. The idea is for a human being that there is no greater moral goal than achieving happiness. Ayn Rand is a cultural icon and has written some powerful stuff for sure like

The man who does not value himself, cannot value anything or anyone.

And now for the picture behind the quote. Well it’s a plant from the garden nearby. But it also represents the two, clear, contrasting moral choices.

Compromise is not always the best option. It sometimes is the worst especially between moral positions.