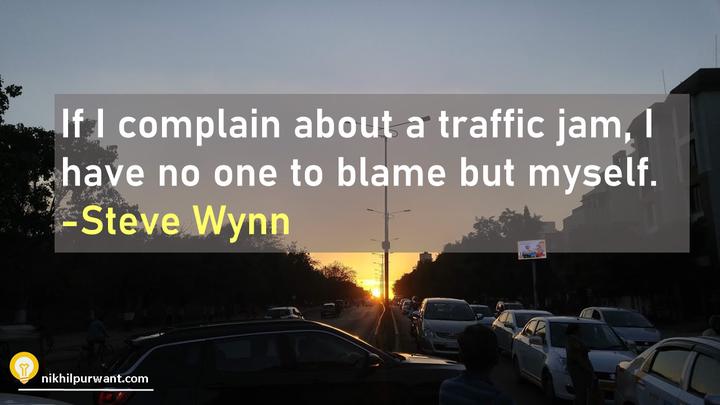 Making mistakes is the best way to learn - they say, but there are some mistakes I make repeatedly and never seem to learn anything. Also if I make the same mistake again it almost feels like it’s not a mistake, it’s a choice.

I dug a little deeper in the mistakes I make repeatedly - I realized the reason I repeat them is because more often I feel they are not even my mistakes. Even thinking rationally I had someone to blame for them.

Getting late for a meeting I have found myself several times stranded on traffic light just a few meters away from my office. Cursing at everyone around.

And how many times I have ran out of milk, batteries or petrol late in the night and have blamed the stores for not being open at that moment.

Never finding a pen when needed has frustrated me more often than I would have liked and believe it or not I have actually gotten mad at the pen for vanishing when I need it.

These might seem trivial but I have realized the pattern has continued for bigger mistakes as well. How many times I have blamed my boss or team for making me work through holidays and not getting appreciated for it.

None of these felt like my mistakes, until I really started getting fed up of repeating them.

We all know this. I did too. But it never felt true till I looked at my repeating mistakes individually

Running out of things can be avoided by keeping a to refill list and acting on it every weekend.

If to fix all these things I could take simple actions - by not taking them I was repating the mistakes. They were my mistakes.

This approach is really changing the way I look at mistakes. Upon realizing a mistake which could sometimes be of an external origin, I have now learnt to reflect on it with this question

Is there something I could have done differently ?

And many a times I find the answer to be yes. Sometimes to avoid the mistake and other times to reduce its impact on me.

I call it the three finger test.

In fact when you are pointing a finger at someone else

With three fingers at you you have the most responsibility - not always but often.

And the thumb pointing at the sky accounts for the randomness of the situation and then no one is to blame. For example you left early for office but it started raining heavily. This situation the thumb shows the direction of the blame. It’s the randomness.

So today’s quote may not seem very profound but it makes me consider other situations - not just traffic where I could do something to not repeat my mistake. The quote is attributed to Steve Wynn who is an american real estate developer. He has built some famous casinos in LA including The Mirage and Bellagio

And now for the picture behind the quote. This is the evening rush on a nearby street. I was able to capture this sunset just because I was on a bicycle - something I use quite regularly now to avoid traffic.