11. The Worst Thing You Can Do Is, Do Nothing 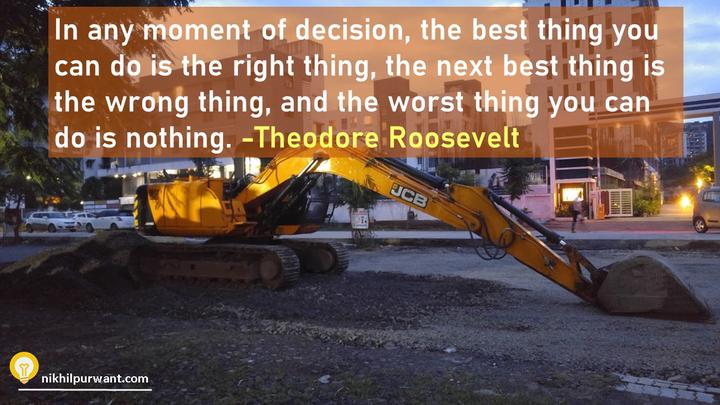 An average human being makes about 35000 decisions every day. It’s true, do a little google search to verify and you will be astonished that this is a correct number.

Of course you would have made a few decisions in the process, whether to believe this number and should you actually search or not And, You might also looking at this outlandish number decide not to continue reading this post!

In that case let me make it easier on you, here’s the screenshot of the actual google search !

And now if you have decided to continue with this post, let me tell you that many of these decisions are pretty trivial (e.g. whether to take stairs or elevator, use spoon vs a fork) and while we do take them - we do it instinctively.

But there are some decisions that take a lot of time, that’s because - decisions have consequences, some small and some pretty big one.

That sometimes then puts us in a state of limbo because we worry about the consequences. This has happened to me many a times and more often than not when the decisions is inevitable, I have found that taking a decision is always better than sitting on it and these are my reasons

That’s not to say that we should not do due diligence before making a decision which is of a binary nature (e.g. whether to buy a particular house, whether or not to marry X person) in fact this advice is applicable after you have done all the research there is to it for making a decision.

And what I have found is that even after you have done all the research and still find it difficult to decide, may be it’s not something you want to do!

So for example if you are fighting with yourselves whether your next phone has to be an iphone or an Android even after considering the pros and cons for months - may be you should continue using your current phone. Because had this decision been so important, urgent and inevitable you would have taken it already.

I am sure you have many more such experiences, do share them in comments.

The quote we started this post with is attributed to “Teddy” Theodore Roosevelt. He became the president of the United States at the age of 42 and still holds the record of being the youngest president ever. His efforts to end the Russia-Japan war won him the Noble peace prize.

One quite interesting thing about him. In 1912, on his way to give a speech he was shot, and the bullet went through his eyeglass case and a folded copy of his speech, before getting stuck in his chest muscle - where it remained forever. Mr. Roosevelt continued that day giving a 90 minute speech, before seeking medical assistance. The doctor decided to keep the bullet inside, citing that it was more dangerous to remove it!

But did Mr. Roosevelt take that decision without thinking, he did not - he was a hunter and an anatomist himself - he knew if he was not coughing blood, the bullet had not reached his lungs - so he decided to continue with his speech.

Amusing right. I think he must be glad his doctor decided to do nothing and leave the bullet in.

And as always - the picture behind the quote - Well that’s an excavator doing nothing. Notice its body language.. does it appear to be relaxed or tormenting to make a decision?

Remember in a moment of decision the worst thing you can do is do nothing !

And let me leave you with a question - what decisions you are sitting on right now :)

Thank you for reading through!