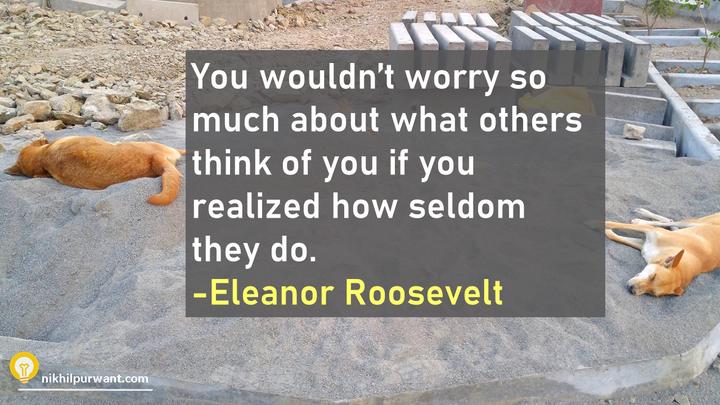 Try this - when you are around a stranger; start your conversation by telling them about what you do, and then keep talking about yourself - 9 out of 10 times they will excuse themselves or straight up run away.

And next time again, when you are around a stranger start your conversation by asking them what they do for a living and then keep talking to them about themselves. 9 out of 10 times you will have a satisfying conversation and there is a good chance you’d make a friend out of this conversation.

How much anxiety we carry just by worrying about people’s opinion of us and how many decisions we make are influenced by peer pressure which is a form of getting bothered about approval from our peers.

Personally, I have been trying to work on fixing this - not getting constantly bothered by “what others think about me” thought and I think I have come up with a solution.

I made a list of 5 people who truly matter to me and have helped me be where I am right now. They include both some friends and few family members. And every few days I apprise them of what I am doing in life and in work and consult them for every important decision I am about to make.

And I have found out is that - if I am making a mistake, not only they point it out but also counsel me (sometimes for hours at a time) in what I should do.

In an ideal world it would be nice to be not at all worried about “what people are thinking” about me.

But with this technique, I have created a small advising circle around me which many a times acts as a fail safe mechanism protecting me from some of my own decisions. And trust me I have many instances where their advice came in very handy and my relationship with them grew deeper just by conversing more.

First step though, is realizing very few people around us really give any thought to what we are doing with our lives - they are as selfish as us and love thinking about themselves and their decisions.

and that is what is highlighted in the quote

You wouldn’t worry so much about what others think of you if you realized how seldom they do.

attributed to Eleanor Roosevelt who was the longest serving first lady of the United states.

And as always the picture behind the quote - Well we all know animals never really ever worry about what their peers are thinking about them and that’s why just like you see in the picture here - they can peacfully relax in the middle of the road, on construction material. Not a care in the world.

Take the anxiety away … Stop worrying - no one is obsessed about you … And that is a good thing!

Do let me know in comments if you know of any more techniques to not worry about what people think about you !