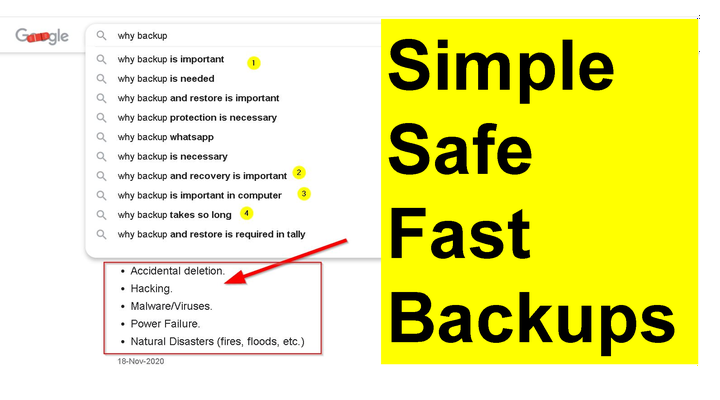 If you already know the the importance of backups - skip to the youtube demo at the end of the article - to find out how you can backup your data securely and rapidly, else read on !

Most people realize the importance of data backup when it is too late.

Let that sink in

Are you one of them?

Many of us have heard horror stories about a crashed computer, something we definitely don’t want to happen to us. Not while we don’t have the backup of all the many years worth of data from our desktops and laptops.

Interestingly many of us have at least few hundred GB sized USBs, external harddrives lying around and we still put off backing up to “later”.

This is one of those things - while we know how important it is, we kick the can down the road anyway.

There are 2 kinds of backups

Now the first kind of backups are large (upwards of 200Gbs for a windows installation) but they provide the best data protection. They generally require a third party software.

Seems pretty straight forward right ? then why have you not been backing up regularly ? even with so much of additional storage at your disposal (external hard drives, USBs etc)

Anyways before I make you feel helpless about the situation, here’s what I have recently come up with after using different backup products and strategies; this fits my needs of important data backup.

To Run it on a windows 10 machine

Check out the demo at the end or follow these steps

To Run it on a Linux / Mac Machine

Check out the demo at the end or follow these steps

And here's the demo video

Demo - Use Your Own Backup Scripts | Simple, Safe and Fast Backups !

Thank you for reading through