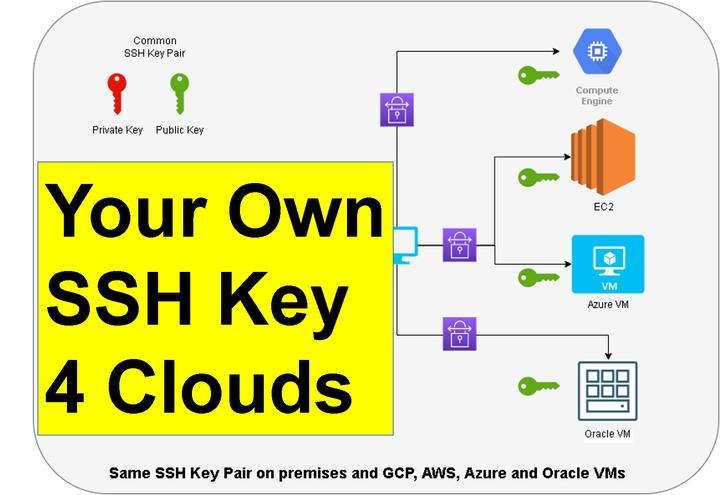 As Always - You can directly scroll down for the Youtube Video. And since the video is extremely detailed one, I am keeping the blog post itself a bit light.

Multicloud is not just a buzzword anymore. And for customers who are not thinking about multicloud, hybird cloud is already a reality.

All right, so with large percentage of the workloads being IaaS (Infrastructure as a Service) workloads, SSH key management becomes quite important. And managing keys on one platform (on premises for example) is challenging enough, doing so on 2 or possibly 3 (on premises and say 2 cloud providers) can go out of hands very quickly.

In this blog post I am not really providing a solution for SSH key management across platforms, we will takle that in a later post.

But by using the same SSH key pair across 5 different platforms (On Premises, GCP, AWS, Azure and OCI), I am am providing a glimpse of what options are available.

Additionally once you / your team gets comfortable with the quirks of SSH key pairs on each of the platforms, it becomes that much easier to plan the SSH key management strategy.

As we generate key pair using ssh-keygen command, which is not natively available on windows, we use git bash for that. We also use ssh command itself from within git bash, however you could use windows 10 native ssh command.

Most of the Linux distros and Mac come prebundled with both ssh-keygen and ssh commands. So nothing to do here.

Commands used in the demo

DEMO | Use your own SSH Key on GCP, AWS, Azure, OCI and On Premises

Thank you for reading through, Please share if it’s useful to someone.