23. Be Your Authentic Self 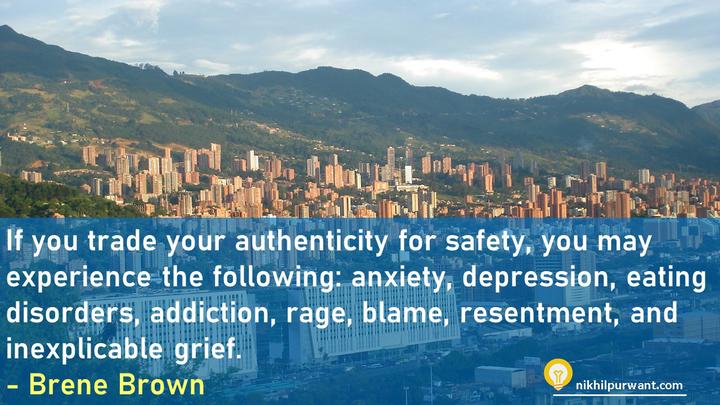 Human beings are social animals. We live in a pack or a group. Family, friends, work colleagues, gym buddies - so many small packs!

Being part of a pack, group or a tribe needs one to get acceptance from the rest of the members. These days diversity of thoughts is not the most tolerated thing. You can be isolated very quickly.

Most of us are actually scared of what might happen we actually speak up. Especially when our opinion is even slightly different than that of our group. And it’s not just group, there are examples of people getting divorced or breaking up for expressing their real political views to their partners.

You can lose your job for uttering a different opinion. But it gets worse. You can be ostracized for opposing clearly immoral things like corruption, regionalism and favoritism.

Many a times we keep our authentic opinions to ourselves just to be part of a group, keep our job, get approval from our spouse or family. We justify that as a fair compromise to keep things stable.

Give it a thought, how many friendships, relationships - work and personal you have kept alive just by keeping mum. Not speaking up, tolerating the morally wrong.

Is it really worth it? You are being part of a group which does not welcome the real “you”.

About a decade ago I went to Colombia for some work. I was staying in Medellin - a beautiful city whose reputation is marred by its former resident Pablo Escobar - the drug king. Nevertheless, fantastic city with beautiful, friendly people. And since I had learnt a bit of Spanish, I was having a decent time there. Work and otherwise.

My manager in Medellin was an absolute bully. He would device plans to keep the team busy, doing things that would amount to nothing. In fact it would be counterproductive and would harm the project and client in the long run. I would bring it up time to time but my opinions would get crushed and the team there was scared to act on their righteous impulses by fear of persecution from the manager.

I was torn between my authentic opinions and my job safety there. But being a fiery 26 year old I could not really contain my resentment and kept speaking up whenever necessary. So one fine day I was asked to leave the place. It was humiliatingly abrupt. None of my team members publicly supported me, however privately each one of them told me I was right.

I came back to India. Few months after I switched to a new company but I would always wonder whether I did the right thing. Many years later one of my former teammates actually reached out to me to say that most of the work done by that team had to be scrapped at a great dismay of the client.

While I felt vindicated for standing up for my authentic opinions but the amount of time I spent with that manager and the team was filled with extreme anxiety, animosity and uncertainty. Although eventually I rebelled against it, I should have done it way earlier to save myself from all the negativity.

And that brings me to today’s quote by Brene Brown. She is an American author and professor. Her Ted Talk The power of vulnerability is one of the most popular Ted Talks. A conclusion from that really struck a chord with me

The people who experience love and belonging are those who are ready to let go of who they thought they should be to stay who they are.

Authenticity is at the core of who we are. If we let go of that - well then we stop being our real self.

And now for the picture behind the quote It’s the beautiful city of Medellin I captured from one of the hills there - a reminder for me to be my authentic self.

Tell that to yourself that next time you have to compromise on your authenticity.